Now, I've only played the game for around 8 hours. But I want to do a review, and perhaps update it in the future when I've played it even longer.

There are lots of positives and negatives which make this game very uneven. Yet, I'm having fun, and I can't stop playing.
4 Pros and 4 Cons.

Pros:
Stunning visuals - The game looks fantastic. Whether it's 4:3 low res, or 16:9 you will be amazed by them. Some parts make the characters look like real humans in a movie. I can't stress enough how amazing this game looks. But, visuals aren't everything in a game. Without good gameplay it would flop.

Characters - Also a negative. So far I have liked 3 out 6 characters. The only ones with personality. They liven up the story, and have a unique comedy for each character. Vanille, Sazh and Lightning all have their high and low moments but it works for the situation they are in.

Story - The story so far has been very good. Easy to follow to an extent. I never played through 10 - 12 and even though they are not linked, I still feel I've missed something out. It's not the greatest RPG story I've heard, but it's up there. The writing in the game is pretty good as well.

Battle system - The system is very clear and within the first few battles you will get the hang of it. Sometimes it can be hard to choose the right choice though due to the battles be so crazy. I like to think of that as a good thing though.

Linear - The game is very linear. If you enjoy sandbox games, then you may not like the freedom in this game. At times you are restricted to very small places, and hardly ever in large areas in which you are free to roam without a path to follow.

WHY ARE THEY SO FUCKING LOUD. After 8 hours they still haunt me.

Characters - Some of the characters are very bland. The only emotion is depressed. So it's exactly like other FFs.

Difficulty curve - One moment you are easily trodding along with your full party and everyone geared up. The next minute you are fighting by yourself or with one more party member. Now if you are like me, you have set up the characters in a way that all 3 are used to make each other's life easier. But spliting them up, you make the team unbalanced and prone to having more problems than it's worth.

Overall, the game is decent. I wouldn't say it's the best game out there right now. But it's near the top.

I've never tried any FF game, but I'll try to becouse everyone says its a good game. Nice review btw 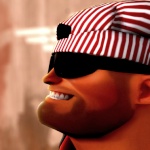 You can always ROM some old Final Fantasy games mate. The best one in my opinion was 6. I think that was the one with Kefka on the SNES? I dunno...

And not enough pros on the generic black guy. He wants a piece of dat ass mother fucker.

Any chance this will be updated due to more gameplay?

King Weavilian wrote:Any chance this will be updated due to more gameplay?

It will be.... eventually. I'm trying to play it but I find it hard to motivate myself to play it, which I shouldn't have to do anyway.

I prefer playing TF2, SF4 and FF9 which I am doing at the moment over FF13.

That's fair. If FF13 ever came out on PC I would consider it, just because I like the levelling system. I would use Sazh, Fang and Hopeless myself.

At the start of this game you have to follow the story...by the 3rd disc they add the element of free roaming. Took me like a month to complete the story + Another to finish the side missions (some of which are VERY challenging...) I feel you will look at this game differently when you reach the 3rd disc...(I say 3rd disc because the game has 3 discs for the xbox 360, and only 1 disc on the PS3.)

Apart from the side missions, the whole game is only slightly challenging...For example, after a battle your party will be fully healed. Other FF games did not have this feature.